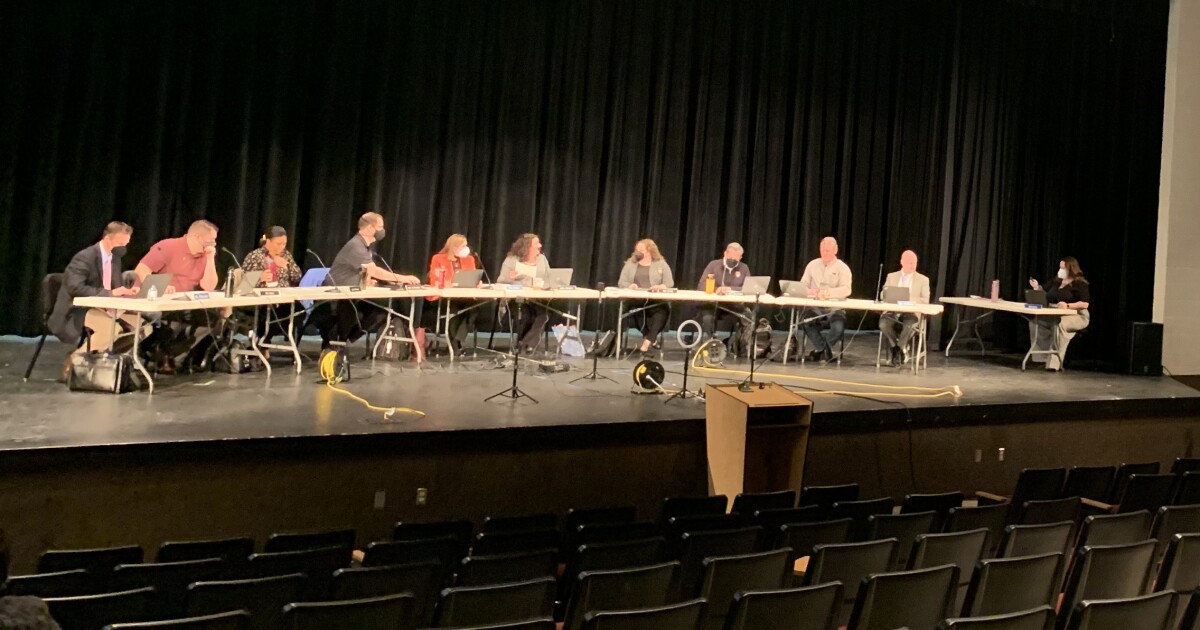 The Unit 5 school board is planning a vote next week on whether to cut dozens of teaching positions, some administrator roles and programs such as grade five band/orchestra and foreign language eighth grade.

As proposed, the changes for next year would reduce the district’s nearly $13 million shortfall by $3 million.

“I know some of these recommendations aren’t easy to hear, and they certainly aren’t easy to recommend,” Superintendent Kristen Weikle said Wednesday night during the special board meeting at Normal Community West High School.

In September, the council instructed its administration to find ways to cut spending and increase revenue. On Wednesday, Weikle detailed the plan that includes cutting 36 full-time teaching positions and two administrator positions, as well as ending paid administrative internships.

About 425 fifth-grade students participate in the music/orchestra program; and about 260 eighth-graders are currently enrolled in a foreign language class in high schools.

Other changes include the removal of elementary school “Schedule B” activities, such as student council and music concerts, and the consolidation of a college-level computer science program from the Unit 5 at Normal Community West High School.

As difficult as it is to make these cuts, the district’s growing debt is equally concerning, Weikle said. If the district stays on its current course, it would run a deficit of more than $30 million in five years, she said.

It’s that looming number that prompted Weikle and school board members to say this spring is the time to explore whether the community would support a tax increase, through a referendum.

Board members acknowledged Wednesday that the $3 million in proposed changes — about $2 million in cuts and $1 million in new revenue — are barely a dent in the giant, growing debt.

But they said it was impossible to cut $14 million from the budget without devastating the education system that Unit 5 residents and students have come to expect. This proposal is just the first phase, said board chair Amy Roser.

Leaders attribute the debacle to a decade of dismal trends in property tax revenues and reduced state funding. That, combined with increased enrollment and increased staffing needs, as well as state wage mandates, created the situation, they said.

Nearly 60% of Unit 5’s budget revenue comes from local property taxes and another 20% from the state. Both of these categories have suffered significant blows over the past decade.

“The situation we find ourselves in is in no way due to mismanagement of funds. It’s a variety of factors that got us to where we are today,” Weikle said.

These included steep declines in property tax revenue over the past decade, as well as Illinois’ proportional rationing policy that left Unit 5 with a shortfall of $19 million. It’s money he’ll never get back, Weikle said, including about $8 million for the education fund.

The Education Fund is the largest fund in the district, providing staff salaries, as well as materials and contracts needed to educate students. Residents of Unit 5 have come to expect the opportunities the district provides for its students and skilled staff to implement the programs, Weikle said.

In recent years, the district has turned to cash bonds to patch up the budget. Last month, the board approved the issuance of bonds of up to $46 million to meet the next few years. But Weikle described the link only covers a brief period.

“It would be something that would be more of a long-term solution,” Weikle said. “We can’t nickel and dime our way out of our budget deficit. So we are really looking for financial stability.

The district simply cannot keep the property tax rate at $2.72 for the education fund and be sustainable over the long term, board member Barry Hitchins agreed.

“We will need a referendum at some point,” he said.

Roser said the board takes its role of financial accountability seriously. Members have been working with the administration and spending time looking at where it can make cuts and where it can increase its revenue.

But for long-term financial health, Unit 5 taxpayers will have to look within, she said.

“What kind of education do you want? What kind of opportunities do you want for your students and what value does that have for you as a member of the community?” she says.

Although many of the school board meetings this year drew throngs of public commentators — passionate about mask-wearing policies and culture war topics such as gender issues and lessons about race — hardly anyone attended Wednesday’s two-hour meeting in the Normal West auditorium.

The stakes are high. Enrolling over 12,000 students, Unit 5 is one of the largest districts in Illinois, with a budget of over $200 million.

Roser noted that while headlines on other topics might have distracted Unit 5 residents from the deficit, she hopes that this spring the community will come together and focus on the district’s financial crisis.

Weikle said that aside from the upcoming board vote on proposed changes, other next steps include directors meeting with union leaders and focusing on strategic planning with the community.

Following Wednesday’s meeting, the Unit Five Education Association released a statement on its Facebook page in which the union echoed the administration’s assessment of the root causes of the deficit – state funding issues and the need for more local revenue.

“We have explicitly expressed our willingness to support the district in all efforts to increase revenue, including lobbying state leaders for adequate funding and seeking community support,” reads- we in the message.

But the union post clarified that UFEA members do not think cutting teaching posts is a good option.

UFEA said students in Unit 5 need more staff support, not less. The union said it had negotiated contracts with minimum wage and benefit increases – in an effort to preserve jobs and programs.