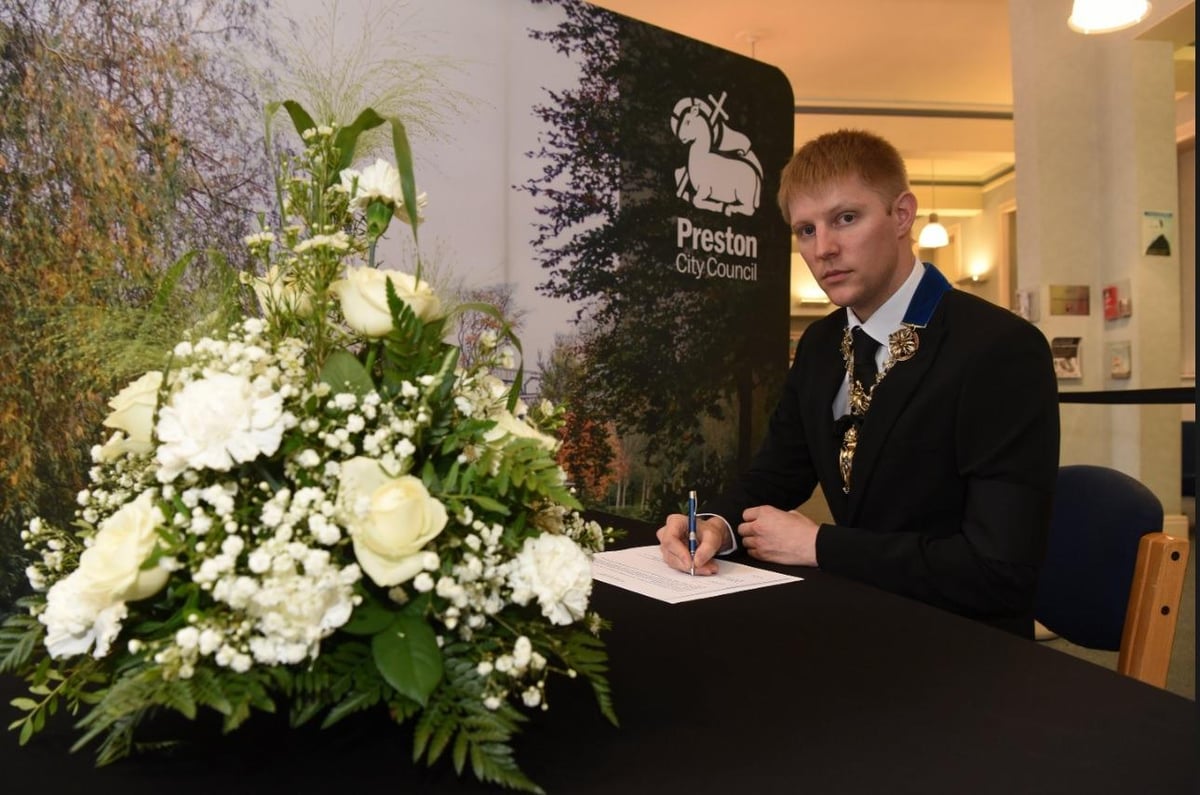 Yet outside there was little to suggest a city deeply in mourning for a beloved queen as people went about their normal Friday business.

However, scratch below the surface and the grief was unmistakable.

“It broke my heart when I learned that the Queen had died. The customers are extremely dark. There is no music here today. Everyone feels it inside.”

Adrian wore a black tie under his butcher’s whites as a sign of respect. All the staff at his stall were also dressed in black.

“If we could have done more, we would have,” said her son Sam. “But we didn’t have much time between the news of the Queen’s death and the opening today. “

Businesses across the city have clearly faced the same dilemma and more are expected to create tributes to the 96-year-old monarch as the days go by.

Floral tributes left at the obelisk in Preston’s Flag Market.

Right now, most of the sadness seems to be kept quietly under wraps.

Two downtown charity shops closed for the day as a mark of respect. A handful of others displayed Union flags, unsure of what was acceptable so soon after Her Majesty’s death.

Across the road, at the Banana King fruit and vegetable store, staff had shot the Platinum Jubilee bunting, fearing it was inappropriate.

“We didn’t know what to do,” said a tearful Ellen Young, who remembers watching the Queen’s coronation in 1952 as a six-year-old on a television with a nine-inch screen. “We have never experienced anything like this before.

A tearful Ellen Young outside the Banana King store in Orchard Street.

“But now I wish we had continued like this to show how much we love him.”

A life-size cardboard cut-out of the Queen remained in place in the shop’s upstairs window, looking majestically out to shoppers on Orchard Street below.

Floral tributes were beginning to be left at the foot of the Flag Market Obelisk – a monument the Queen unveiled in 1979.

Books of condolence were opened at City Hall, Preston Minster and County Hall for the public to write their feelings about a sovereign who had ruled with such grace and dignity for 70 years.

Most of these signature messages had known no other monarch. Suddenly their lives had changed – the nation now had a king – and some were struggling to express how sad they were.

At the Minster, the Vicar of Preston, Reverend Sam Haigh, said: “The general mood is gloomy. It is really palpable in those I have spoken to.

“Even though Her Majesty was 96 and had been ill, I would say people were still shocked when they heard the news.”

The Minster building would normally be closed on a Friday, but not today. The doors opened at 9 a.m. for people to sign the book and say a private prayer.

“Today there is a real sense of the gravity of the occasion,” Reverend Haigh added. “I think a lot of people want to mark the occasion and pay tribute in some way.

“That’s why condolence books are available and important. It gives people a way to express their gratitude and grief.”

The Vicar of Preston Rev Sam Haigh with the Minister’s book of condolences.

Around the corner from the town hall, Preston Coun Mayor Neil Darby opened the council’s own midday book with black posters of the Queen on either side of the main door to direct people inside.

“A lot of them seemed to think she could go on forever,” he said. “And many wished she could have reached 100 and, perhaps smiling, wondered if she would have sent herself a card?

“The Queen was so loving, gracious and understanding, although her family had their moments over the years.

“I think many are hoping that King Charles will take the leadership that his mother has provided. Maybe he can somehow offer an olive branch to the family, reach out a hand and bring them all together.”

On the door of the British Heart Foundation shop in Orchard Street, a simple message read: “This shop is closed today as a mark of respect for the passing of Her Majesty Queen Elizabeth II.”

In Fishergate, the British Red Cross charity shop did the same. “As a sign of respect, we will be closed today,” said their sign in the window.

Screens throughout St George’s Shopping Center showed images of Her Majesty against a black background.

Back at the Livesey Butchers stand, staff were still numb after happily meeting Prince Edward and Sophie during Wednesday’s royal visit, then hearing 24 hours later that the couple had rushed to Balmoral to be at the bedside of the queen.

“I had never met a Royal before and it made my heart glad,” Adrian said. “They were brilliant. They took so much interest in the covered market and those of us who work here.

“Then to have it happen the next day was just overwhelming. God knows how they feel.

“What the Queen did for this country was immense. If anyone comes here and says the Royal Family is a waste of taxpayers’ money, I swear I will shut them out.”