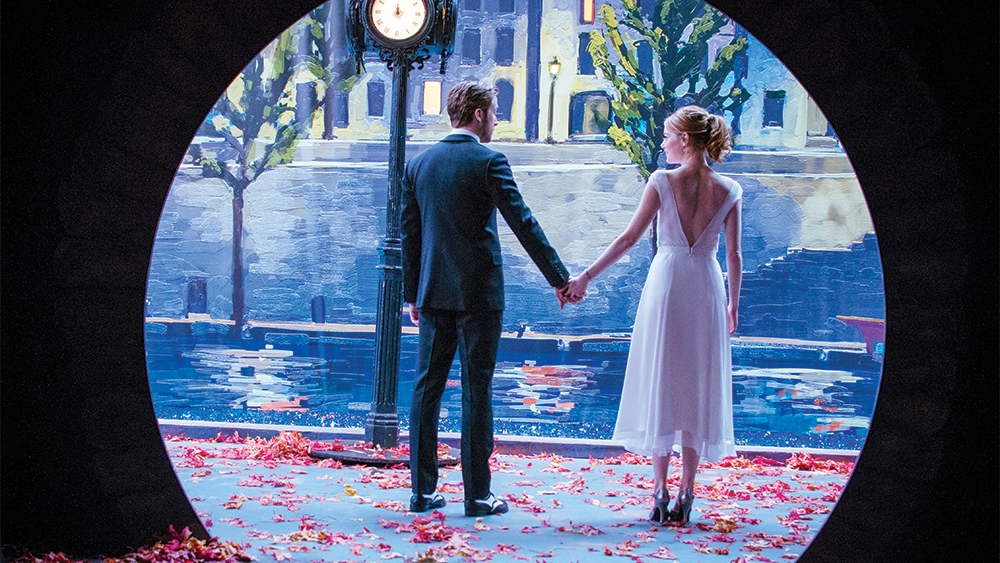 “La La Land” is deceptively innovative. It evokes classic musicals while pushing the genre forward; it’s old-fashioned and modern at the same time.

Damien Chazelle makes his bold intention clear from the start: Drivers stuck on a crowded freeway ramp exit their cars to sing and dance in a dazzling pyrotechnic display. When the music stops, they get into their cars and the movie’s star-crossed future lovers look at each other for the first time. They don’t faint; Sebastian (Ryan Gosling) flips the bird over the distracted Mia (Emma Stone) before walking away.

Traffic and its Prius are resolutely modern; so, too, his reaction. The fact that she’s clearly an actress preparing for an audition, however, suggests we may be heading into familiar territory soon.

Sure enough, visual allusions to classic musicals soon appear on screen. Mia and her aspiring actresses sport candy-colored dresses similar to those worn by Catherine Deneuve in “The Umbrellas of Cherbourg”; his apartment looks like a throwback in Technicolor from a decade earlier. And the story itself, about dreamers trying to make it in Hollywood, is reminiscent of classic musicals like “Singin’ in the Rain.”

Chazelle departed from musical norms by filming on actual city streets rather than studio sound stages. He filmed in familiar locations across the greater Los Angeles area, from Griffith Park to Hermosa Beach. Additionally, he recorded some of the actual vocals on location, adding another logistical hurdle to the production.

“Part of the goal was not just to shoot in LA, but to shoot LA for LA,” Chazelle explains. “So if there’s a dance number on a freeway, it has to be a real freeway. And then we saved the ‘Brigadoon’ style sound elements for the final sequence of the film.

By the end of the film, the two have found their way as artists. Jazz purist Sebastian has gone beyond the cover bands and pop music that tormented him, while pragmatic Mia triumphs beyond her dreams. Cinema itself has become more elaborate.

Like her characters, Chazelle worships the past. But he does not devote himself to it slavishly.

By fusing retro and modern, he reinvigorated a genre that needed it. Musicals were once a staple of the big screen, but in recent years they’ve been overlooked for hipper fare. Hit musicals tend to be stage adaptations à la “Chicago” or “Mamma Mia!” with performances of songs à la “Pitch Perfect” or grind-’em-ups like “Magic Mike” filling the void of song and dance.

But truly original musicals where the characters start singing and dancing out of sheer joie de vivre have been rare. “La La Land” could inspire more filmmakers to put a different spin on the genre.

(Tim Gray contributed to this report.)