Kolkata/IBNS: American hip-hop artist Carl Hollier or DJ Invisible was in Kolkata recently with other members of his group, The Invisibles, to attend a workshop as well as a live performance as the cases of Covid -19 seems to be more or less controlled in India.

DJ Invisible and his band members had attended a workshop, hosted by the US Embassy in India and the US Consulate in Kolkata, at the American Center last week.

While interacting with IBNS in a corner of the American Center, DJ Invisible, while talking about the hip-hop culture taking shape in India, enthused, “Hip-hop is an all-inclusive music genre .In hip-hop, a DJ’s style is different from someone else’s.That’s what HipHop is.It’s about seeing,adapting and learning,self shape and appropriate it.

“I want to see how hip-hop in Kolkata has become,” added DJ Invisible, a professional DJ from Michigan.

DJ Invisible and his band members, namely lyricist Miz Korona, producer and beatboxer Richie ‘Robot’ Steighner and emcee and rapper Khary Kimani Turner, were brimming with excitement to take part in a live show after two years of the Covid-19 pandemic and the subsequent lockdown.

Sharing his experience during confinement, DJ Invisible says: “Everyone was in a box. I had started virtually teaching DJs from all over the world. I was trying to stay busy and interact with people online.

“That’s why this experience is so much more important because now it turns into a live performance. The level of excitement is out of control. So excited to be back in front of real people.”

The same was echoed in the words of Khary who said, “We used a lot of technology, stayed in touch with people and saw their faces (online). We had spent a lot of time staying close to people. things that were really important to us. But now with the world reopening, as DJ said, it’s really like celebrating life together.”

The live show took place at the Eastern Zone Cultural Center or EZCC, which is under the Government of India, in the Salt Lake region of Kolkata.

Miz Korona, who discovered her talent in painting during the pandemic, has shared how much she loves the old architectures of Kolkata, a former British colony.

“The architecture is beautiful, the buildings so tall. Amazing. Very colorful. The vehicles are cool,” Korona said as she prepared for the live show held on April 26, a day after the ‘workshop. 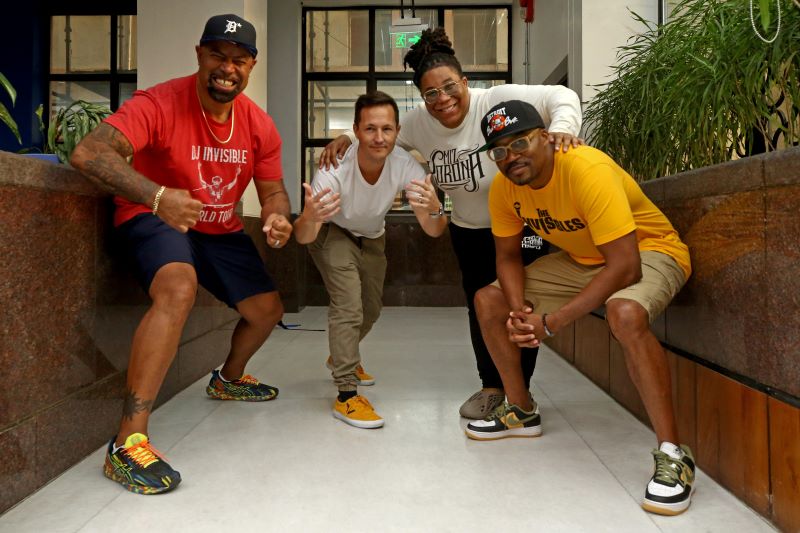 The Invisibles at the American Center in Calcutta

Cutting Korona’s speech, DJ Invisible shared with us how much he loves the city’s old yellow taxis (ambassadors), which are now nearly swept away by air-conditioned enforcement taxis.

“I’ve found romance with the older vehicles in Kolkata,” says DJ Invisible amid the rising temperature and adds, “Kolkata is both rock and romantic.”