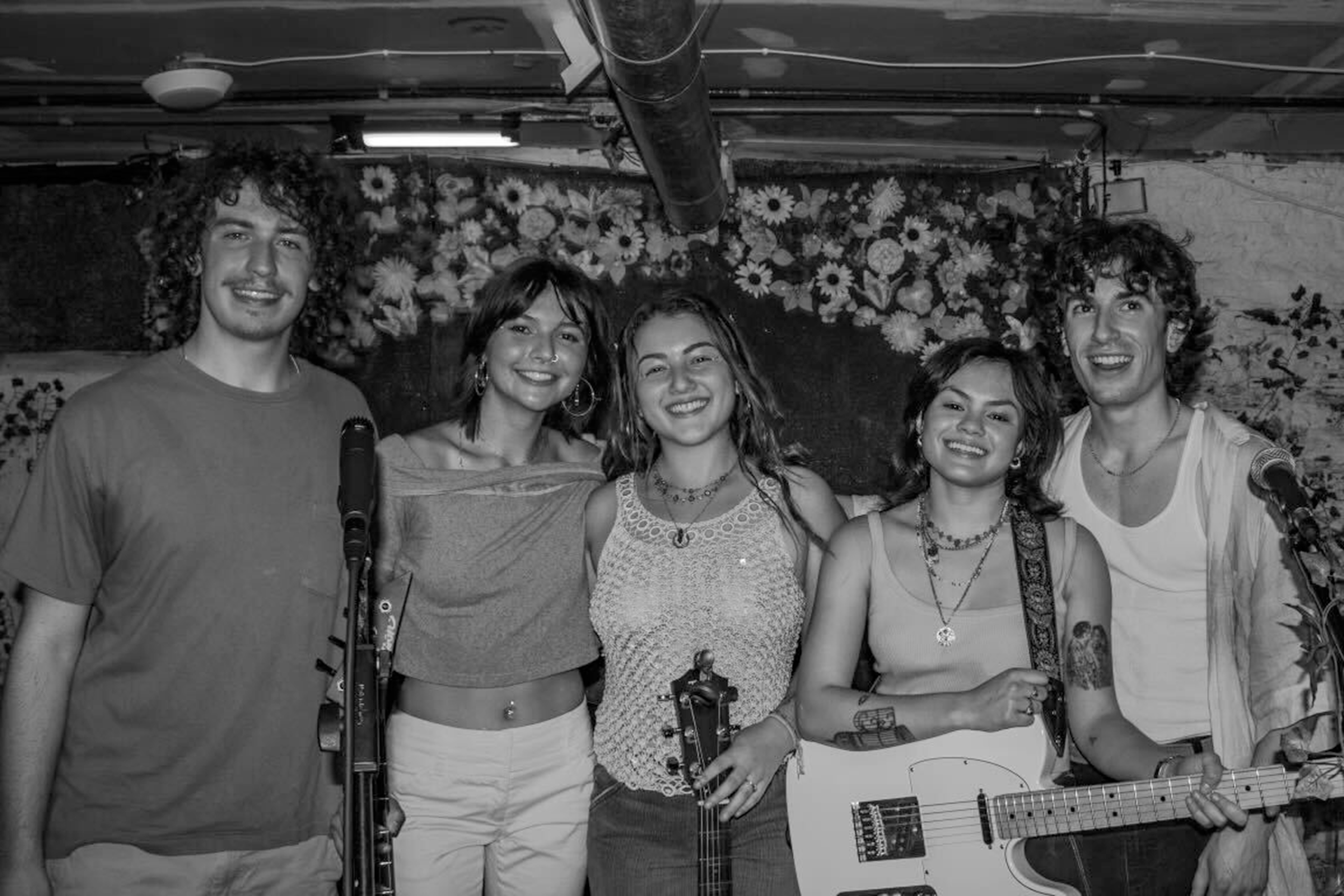 Get the latest news from Syracuse delivered straight to your inbox.
Subscribe to our newsletter here.

It came about by accident: Sam Parrish, Maria Nido and Corey Chun, three Syracuse University juniors, were jamming at Dellplain Hall their freshman year and decided to record the song they were working on. Later, the group listened to the recording and were surprised to hear nature sounds – specifically ribbits – in the background of a white noise machine. Then an idea germinated in the head of the trio.

“We were literally like frogs!” Chun said laughing. “If we ever do this thing, we have to call ourselves Froggies.”

Parrish and Nido met while on a music business program in the summer of 2019, but they didn’t form a solid bond at first. Once the band arrived at college, Nido and Chun became roommates at Dellplain and through the Bandier program, the trio began playing music together.

While they initially had no intention of starting a band together, Chun said that one night they decided to keep the band going.

“I think once everyone started singing a bit, we started opening up and it just flowed from there,” Chun said. “I think we realized it definitely had to be something that has longevity.”

Soon after, Nido invited his friend Grady Collingbourne, a junior and drummer, to join their band. And Collingbourne eventually introduced Sam Ronan, a senior pianist, to the band as well.

Chun said the group “came to life” after Collingbourne and Ronan joined. Chun, Nido and Parrish shared vocals, Nido and Chun were on guitars and Parrish was on bass.

Even with this energy, the genre group felt a lot of anxiety during their first home show. It wasn’t due to a lack of experience, as Parrish had previously played with another band, Studio89. Instead, the band were discouraged by the lack of female-led bands in the SU music scene and were nervous about the reception they would receive from audiences.

But on March 7, Froggies hit the stage for the first time with a performance at The Coup, a house venue. After “ripping the band-aid off,” Parrish said she realized the band was on an upward trajectory and could only improve from there.

The band also said they have seen a big increase in the number of female-led bands entering the music scene since they started playing. While hesitant to take responsibility for the change, they instead pointed the finger at Syracuse’s house show scene community.

“It creates a community where she feels very accessible to others,” Chun said. “It’s not something revolutionary for them to get into.”

As Froggies got better and more successful, members’ schedules began to fill up. The band has played shows every week for the past six weeks, including headlining SU alumnus Charlie Burg. Meanwhile, Froggies is preparing singles and plans to release an EP by the end of the year, Nido said.

Chun described their writing process as a “mishmash” of ideas and emotions that come together through conversations and revisions. Parrish also said that they all know what other people are thinking and feeling, which allows them to have a common creative process.

“When we talk about something, it’s as if we know the content. You know that person, how they react to things, how they probably feel,” Parrish said. “Before, I never wrote with people, but now I feel like I can’t imagine going back.”

While Froggies is a constant in the home show scene right now, it won’t be like this for long. Between Ronan graduating and many members going overseas, Froggies will be separated for some time.

But instead of feeling disappointed or frustrated, the group feels excited. Before everyone disperses, Froggies plans to take advantage of the time they have left by releasing new music and new products. The band sees this change as a way for everyone to grow and improve as musicians, so the reunion will be all the sweeter.

“Definitely not a hard stop,” Parrish said. “We really savor every day.”