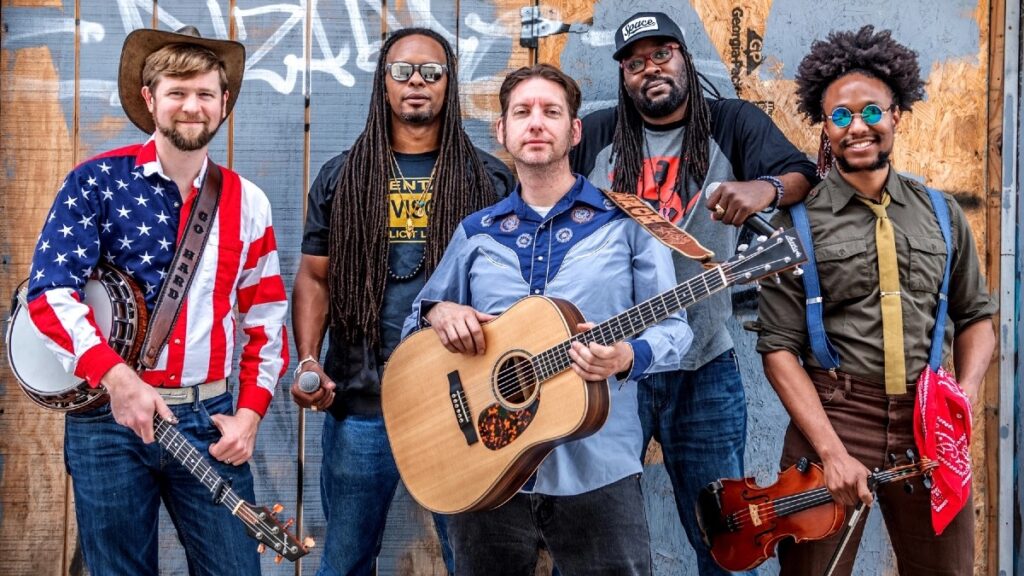 Sometimes, but probably not often enough, you go to a show and something unexpected moves you. You remember why you fell in love with music and performance, the power and passion of live music. This happened to me recently at the Long Road festival in the heart of the UK. Among the country music, Americana, folk and alternative styles of the artists on offer, we came across a live set by Grangstagrass in the Interstate tent.

Power. Passion. Harmony. Musical skill. Make your choice. Gangstagrass was one of the standout performers of the entire weekend and judging by the social media buzz about them afterward, I’m not the only one who felt that way.

Born in 2006 as a project conceived by Brooklyn-based producer Rench (Oscar Owens), the band attempts to fuse roots-based music with Bluegrass and Hip-Hop. Their song, “Long Hard Times to Come”, was selected to be the theme song for the FX network show, “Justified”, which resulted in an Emmy Award nomination in 2010. The group has gone through various changes from line-up over the years and received a remarkable hit. in the arm last year when they appeared on the 16th season of “America’s Got Talent”, reaching the quarter-finals. While promoting their current album, “No Time for Enemies”, we watched their awesome set and then set about finding a niche to tell them about it.

Sometimes doing what I do you become immune to the intricacies of music and maybe even a little complacent about the amount of music you have to write about and critique that you wouldn’t choose to listen to for the pleasure. I want to start by thanking you for moving me with your performance today.

Yeah!! Gangstagrass in the house!! Thank you for noticing us and appreciating what we are trying to do.

That’s when Rench started experimenting with studio sound and the idea that you could merge Bluegrass and Hip-Hop.

How has Gangstagrass evolved and changed since then?

We have this established line up that has been together for a while now. We’re also a lot more collaborative and we explore sounds and ideas together a lot more as a group, which makes us stronger and more creative.

We all put more effort into presenting what resonates with us and what we find interesting rather than just being Rench’s project. He’s the granddaddy of this thing, but the rest of us feel like we have a stake and a say in Gangstagrass now, too.

We each push ourselves further and we all strive to be great at what we do. We’re trying to merge several genres of music into this thing and it’s important that everyone has a say in that. Gangstagrass is now a thing that is greater than the sum of its individual parts.

Watching you live, it shows in spades. Everyone has their moment to shine, but you’re all working together to create something bigger.

We all have an ideological interest in wanting this group to succeed. We can all see what we’re trying to do, bringing all of these influences together and we all want it to go somewhere and be successful.

We’re here for this band and the idea of ​​starting new things together and trying new combinations of sounds and styles.

Sounds like Gangstagrass is more than just a band or group of musicians. It seems like it’s also a movement and a philosophy or an idea too.

Yeah. Absolutely. We’re not just trying to combine genres, we’re ultimately trying to deconstruct genres to eradicate where some of the artificial divisions between genres come from. Bluegrass, Country, Hip-Hop all come from the same influences and sources and we try to create the idea that there should be no division between them.

We almost create something in and of its own genre too.

Have you noticed a blurring or a breakdown of genres in recent years? It certainly feels like things are changing in that direction.

With the public and people listening to music, yes, absolutely. However, even in streaming services, which are supposed to give listeners more freedom to curate their own playlists, the legacy of the division continues as many of these playlists, where people discover new music, are genre-based!

We find that a lot of our audience already listens to a lot of different things and so are very happy to consider what we’re trying to do.

So how do we reduce gender divisions even further?

That’s a great question! With fire!!!!! (laughs) Not enough people are actively asking this question to labels and streaming platforms. The good thing about so much streaming is that you can go from signing up for Post Malone to police to Public Enemy and even Paula Abdul! It would help even more if artists were paid properly by these services, but that’s a whole other issue! (laughing)

So at least one music fan has the ability and the ability to go where they want to go now. This wasn’t the case in the 70s, 80s and 90s when everything was organized by industry and media and people were fed music rather than actively encouraged to seek out new things on their own accord.

Have record labels lost any hold or influence on the industry now because of this?

Record labels may have lost some of their influence, but other third parties have just replaced them as influencers and gatekeepers. Spotify is now one of the big guys, which means people just replaced one middleman with another middleman! (laughs) Spotify is crazier than labels, man.

And Instagram is setting up its own label, apparently!

Fuck them, man. You can put it in the interview!!!! (laughs) Fuck all the intermediaries and corporations because they’re the ones stopping the money from getting the artists who create the music. With Instagram, the focus will only be on them making money! Their goal will not be fairness or creativity or anything nobler than just making money.

As we have seen throughout human history, they will inevitably perpetuate a system in which a small group of people will have the money and the power and they will do whatever they can to maintain it!

You ask a great question about how we can counter this. The answer is simply to be who we are. This has been our goal from the very beginning. We take music as a really insightful way to get a message across, it has to be step 1.

Most of the divisions that present themselves in terms of musical genres are simply fabricated by labels and the industry for marketing and sales purposes. In the 20s and 30s, Jimmie Rodgers sounded like a jazz band with that walking bassline and fiddlers and fiddlers hanging out together. You know, guys like Stuff Smith were hanging out with Bob Wills, there was a huge cross-pollination between genres, but he was sold to different people in different ways by emerging record labels because of their fear of prejudice and racial division. This is what we need to change.

Every week, how many times are you told on social media that you can’t be in country music because of the way you look, sound, and style?

Not as much as you think. We did and it happens from time to time. We like to have fun with them when they appear. The last guy who came to us just seemed to have the racist Tourettes syndrome! (laughs) He was all ‘Gorilla, gorilla, gorilla, middle finger, gorilla’ (laughs) so we took a screenshot and just re-tweeted it there. It was hilarious. We were on the road reading it and it made us laugh.

I imagine you have very loyal and fierce fans who are protective of you and like to tell everyone about you?

Our fans are the best, they are fierce ambassadors for our church and they won’t put up with stuff like trolls! They spread the word for us.

We’re the kind of band that as soon as you come to see us, you understand what we’re trying to do. It’s almost a visual thing as much as it’s a listening thing. Our fans are our most powerful weapon to spread the word and bring music to new people. We’ve had people come to our shows as trolls, they come on purpose to try to belittle or ridicule what we do and they walk away as fans after buying our CDs!

People in southern America love country music and they love hip-hop. A lot of big country stars also listen to hip-hop. So why can’t the two worlds coexist in the eyes of the media or the industry?

There’s definitely a problem with how labels want their artists to be perceived by certain demographics and often hip-hop doesn’t fit into that picture. Behind closed doors and at the club, you will see people enjoying both types of music.

The origins of hip-hop and country music started with the same people in the same places. They both have the same twisted roots!

If you look at where both genres come from and what’s going on in those spaces, you’ll have a bunch of kids sitting on a porch or in the woods and one guy has a banjo and one has a fiddle and one has a box or drum and they just tell stories about being broke, man. Take this to the streets of New York and the Bronx, it was just a bunch of cats beating on the lunch tables – someone had some records they just started scratching and they were telling the same stories too to be broke! The stories are the same: I’m broke but I’m cool as shit, you know?

Both genres were created out of poverty on instruments that could simply be made or found. There were no venues because it required money, so both are just street or woods music, which is the same thing, just in different geographical locations. Bluegrass and Hip-Hop are both very improvisational in terms of jam sessions that grow as people play and where musicians go in terms of creativity as well and we want to bring that idea and that sound to as many people as possible.