President Richard Nixon chats animatedly with a Chinese staff member as he and his wife Pat visit the Shanghai Trade Expo on February 27, 1972. Photo: VCG

This icebreaking trip also gave many Chinese the opportunity to interact in person with Americans. Curiosity, nervousness and contempt were intertwined, but the label on the expected guest of honor as “leader of an imperialist country” did not prompt host China to make the most serious preparations, while efforts were made to ensure that the historical exchange would go smoothly.

Fifty years later, Global Times reporters Feng Yu and Yu Xi interviewed five Shanghai-based Chinese witnesses who recalled their involvement in Nixon’s visit. Besides diplomats and statesmen, how did ordinary people shine behind this great moment in history? And how did this event change their lives, and those of millions of people on both continents?

“How should we treat the leader of an imperialist country?

“After learning about the US president’s visit and the reception task, people were divided on how to greet a US president in the context of China-US relations,” said He Zhaofa, 85, who was a receptionist at the Jin Jiang Hotel when then-US President Richard Nixon visited and stayed in Shanghai in 1972. He shared some details of the encounter with the Global Times.

“The task force persuaded most of us to embrace the task, saying ‘You are not serving Nixon but fulfilling the political task commanded by Chairman Mao,'” he recalls.

Upholding the principles of “not being humble or arrogant; be neither cold nor hot; and be friendly,” he and his colleagues addressed Nixon several times in Shanghai.

During Nixon’s stay, he witnessed the exchanges between the Chinese people and the members of the American delegation. “In the beginning, the American staff didn’t drink Chinese water or eat Chinese food, but later they drank the tea we gave them.”

He shared with the Global Times the story of the Persian cat embroidery. The Jin Jiang Hotel renovated and redecorated Nixon’s presidential suite, which Premier Zhou Enlai inspected twice. He and his colleague bought an embroidered Persian cat decorative accessory in Suzhou, in the neighboring province of Jiangsu. He and his colleagues noticed that the First Lady of the United States, Pat Nixon, liked the article very much and shared it with the leaders. Later, Premier Zhou Enlai decided to gift it to the first lady.

“We could feel President Nixon’s change in mood before and after the Shanghai communiqué was issued,” he revealed, adding that “After the communiqué was issued, Nixon was relaxed and, together with his wife, paid attention to objects and decorations in the suite. They noticed the Persian cat and fell in love with it.”

“I visited the United States with a Chinese table tennis delegation”

She expressed her appreciation for the late Chairman Mao Zedong and the late Premier Zhou Enlai’s visionary strategy of using a small table tennis ball to open the doors of diplomacy.

After the Shanghai communiqué was released, “I visited the United States with the Chinese table tennis delegation,” Zheng recalls. At the White House, Nixon met with them, saying they were the first to open the door to China-US friendship, Zheng said.

Zheng recalled the historical moments with enthusiasm. “President Nixon has said that the friendship between the Chinese and American peoples will certainly be beneficial for world peace,” she noted.

Zheng also recalled his experience talking with Connie Sweeris, one of the 1971 USA team members in China, and her husband Dell Sweeris, during an earlier interview with the Global Times via video link.

“We all talked about how we felt the first time we came to the United States or they came to China,” Zheng said, adding that “they were received by Chinese Premier Zhou Enlai with the highest distinction”.

“Thinking about how difficult it was 50 years ago when we finally broke the ice, China and the United States have every reason to maintain good relations,” Zheng said.

Xia Yongfang, 81, is the former deputy director of the Shanghai Municipal Foreign Affairs Bureau. She participated in the reception of the American delegation in China in 1972 and still remembers the curiosity of Western media for China.

Western media, especially American media, wanted to interview more Chinese people. For example, “they asked about people’s living conditions, salaries, taxes and retirement age,” Xia recalls, adding that “they asked where the wet markets were and where the Chinese were saving money”.

At that time, American reporters said they had no time to eat or sleep, only to report on China, Xia said. “It was an exaggeration, but it showed that they appreciated these interview opportunities and were eager to report on China,” Xia recalled. Some journalists said that after talking to Chinese people, they saw their confidence and self-esteem, as well as confidence in government policies, according to Xia.

“Our performances were not so revolutionary”

Born in 1949, Zhou Liangtie was a young acrobat in Shanghai in 1972. His name and the performance titled “Build Our Physique, Defend the Fatherland” appeared at the top of the show on February 27, 1972, prepared for the visit of US President Richard Nixon .

It was not only an artistic performance, but also a political task. In order to present the perfect effect on stage, Zhou and his peers practiced day and night for the show. They did everything possible to improve their martial arts skills.

On January 7, a rehearsal was held in front of Alexander Haig, then Assistant Assistant to the President for National Security Affairs of the United States, who was on a preparatory mission to China to organize the logistics of Nixon’s visit.

Zhou recalled that they waited until 9:30 p.m. when the rehearsal officially started.

“We used to joke about why Haig was late. Maybe because the food was too delicious,” Zhou told the Global Times.

In the month since Haig’s inspection, Zhou has been training harder, and on February 25, all the acrobats were asked to stay together at a nearby hotel to focus on the show to be performed on February 27.

Then came the night when all their hard work paid off, with a big limelight and thunderous applause.

Zhou said he had a flawed but successful performance that night in front of US President and Chinese Premier Zhou Enlai because “flaws do not hide beauty”.

“Our performances weren’t as groundbreaking as most other acrobatic performances at the time thanks to the flexibility Premier Zhou gave Shanghai,” Zhou Liangtie recalled, adding that compared to the culmination of “characteristics groundbreaking” performances that were considered commonplace in Shanghai. at that time, retaining some traditional elements of acrobatics was not an easy task. It was an era of the more revolutionary the better. Gui Yonghao, a member of the China Welfare Institute (CWI) Children’s Palace welcome team, led a group of children to greet the wife of former US President Richard Nixon, Pat Nixon, and other staff during the historic visit in 1972.

When he recalled the moments, Gui said the experience left a deep impression on him and also impacted his future. Gui himself went on to be a pediatrician specializing in children’s heart disease.

Although they were 12 years old, Gui and his friends knew that every word and action they did would represent the motherland. At that time, there were many activity groups in the CWI Children’s Palace, including singing and dancing, model airplane, paper-cutting, and piano.

When President Nixon’s wife Pat Nixon visited the CWI Children’s Palace in Shanghai in 1972, she was moved to tears when she heard the choir sing the American folk song “Turkey in the Straw”, Gui recalls, noting that every detail was well arranged. 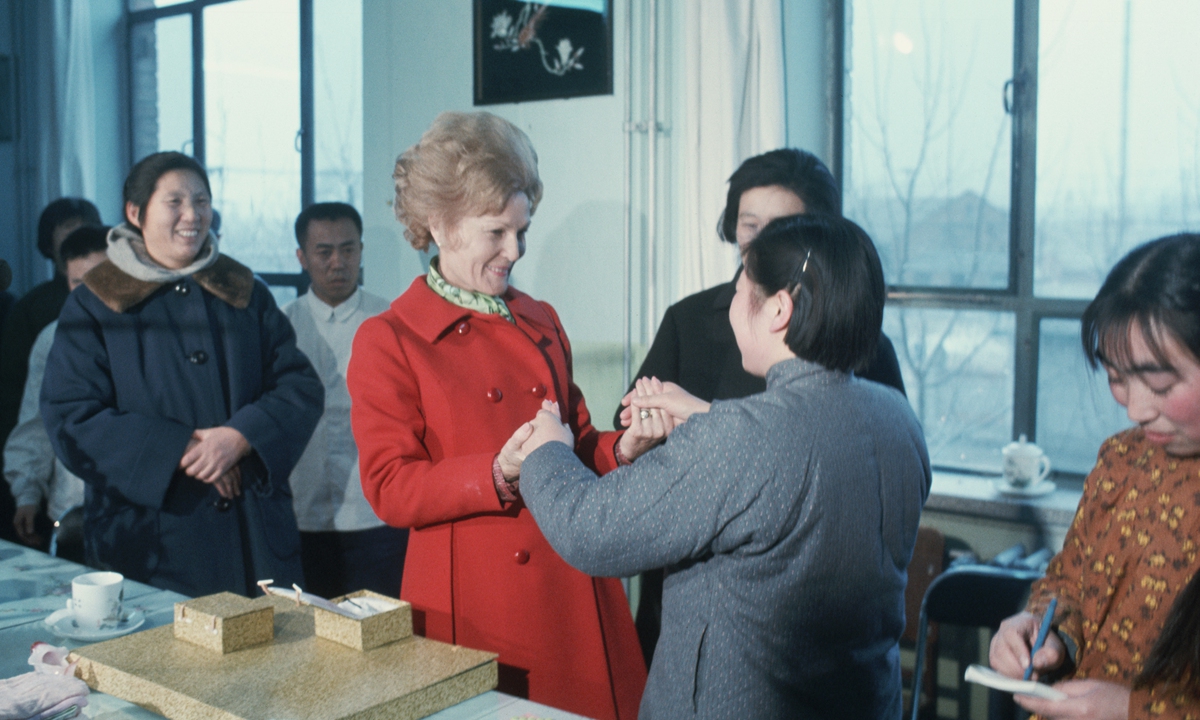 Pat Nixon warmly thanks a Chinese educator for a gift while visiting a school. Photo: VC

Along with other group members, Gui tried to learn foreign languages ​​and world geography, and studied the customs and cultures of people in various countries.

“Friendship between peoples is the key to healthy relations between states, while affinity lies in mutual understanding between peoples.” Gui said that thought took root and germinated in his heart at that time.