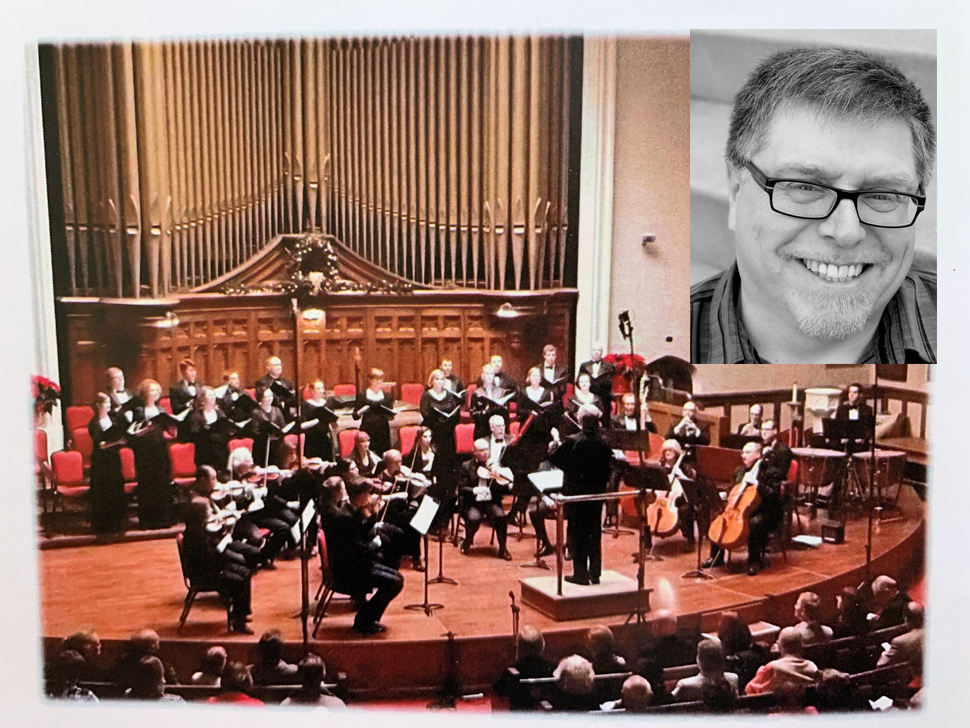 Robert Neufeld was known to be someone you heard before you saw him.

If you’ve ever attended an event hosted by the “Eastman Choral Association,” like an Easter dawn service, you would have heard it. While listening to a classical concert featuring local artists like Mary Jane Hiebert or David Klassen, you might have heard it.

Although he could sing very well, it was his keyboard skills, be it piano or organ, where he shone. His musical talents manifested at a young age and he was still playing in a church on Sunday, October 23 before passing away peacefully on November 1, 2022.

Neufeld will be remembered and missed by many in the Southeast, especially those he backed and the many choristers he led over the years.

SRSS choir director Kristel Peters says she and Robert go back a long way. “On so many occasions he was my accompanist for festival performances and then we were together on the committee of the Eastman Choral Association. He took over from the Manitoba Choral Association as executive director while I finished my university years and as director. I knew him from being a young student until adulthood. Work side by side in different committees. He was also the executive director of the Foundation for Choral Music in Manitoba, and I had the privilege of serving on the committee with him as well. We need to give money to choral associations for choral projects across the province. It’s just been a hoot hanging out with him so many times. He was a workaholic when it came to accompanying or helping different groups and we loved working with him.

But there is one performance she remembers as her favorite. “It was when Robert accompanied me for a kind of very hearty and almost a bit steamy song called ‘J’aime un piano’. I sang about all the sidekicks I fell in love with. But I had to flirt with him on stage and he was so stoic and didn’t smile while we were, you know, performing. And at some point, I think I even got on the piano. It was the SRSS little grand piano or maybe the full grand piano, anyway, I jumped on it and sang for it from there and. as you know, he stroked his hair and everything, well, he kept it together and just played the piano. It was so much fun. It was such a good time.

Peters goes on to describe him: “He’s a person who always had a twinkle in his eye and his little jokes and laughs in a quiet context. So you would hear him, just sort of, in the back and he would whisper something to you at a board meeting or just a little comment and we would all burst out laughing. He had a great sense of humor and enjoyed supporting all the different performers and choirs and music in Manitoba and southeastern Manitoba. Especially in the Eastman area, Robert was always there. He was still there. He was still playing. He was always willing to give of his time and talents.

She remembers her talent on the organ. “Hearing him play was always my most favorite epic moment. He was so good at really uplifting people and bringing all the stops if you want to the organ and really working on those key changes and getting people singing. It was always such a catchy rendition, especially during the Eastman Choral Association Easter Sunrise services, his “Up from the grave He arose” was nothing short of monumental.

“Robert was a musician that was really hard to compare to anyone else. His level of skill and sensitivity as a pianist was beyond what many of us can even dream of. He supported me so much and as a young singer, and even as a professional later in my life, when I had the chance to play with him, I always knew the support would be there and he would work very hard to elevate the whole performance. I think our community, in our region and our province will experience a very great loss without him sitting at that keyboard and being that support person that we have all relied on for so many years. years.

Klassen remembers being a very young singer and performing in a vocal recital with Neufeld on the piano. “I remember it was my very first time singing in public after I started lessons and Robert was playing me a song that had a pretty repetitive intro. And of course it was my very first performance, I missed my entrance and so he went back to the beginning and played it again. Of course, nobody knew, but then he came up to me, and he smiled with his, you know, sly smile and he said, “I think I’m going to have to charge you extra for all these additional bars which I have put in place to save you in your performance. We laughed a lot. ”

“I mean he wanted above all to work with students who are at the very beginning of their learning, up to professionals. Many of us here at Steinbach, those who have worked with him in our professional lives, know the value of this whole story and just Robert being a warm and generous collaborative pianist and friend.

Klassen shares Neufeld’s expertise on the organ. “I worked with him as a conductor. I’ve heard him play the organ at many concerts and many services, and you know, his talent on the organ was another one of those things that’s very hard to put into words. He had a way in his game of lifting the congregation, you know, when he was playing. He had this incredible ability to make people sing from the keyboard. He didn’t necessarily lead and he didn’t sing for the congregation, but he played and supported them in a congregational setting.

“He had these most amazing key changes while playing anthems. Many people will remember that he had an incredible ability to raise that roof with such adoration. And as amazing as this congregation sang, he made it even greater.

Klassen says Robert has always been involved with the Steinbach Arts Council. “He was always ready to help and contribute. He has performed in several community/school musicals that I have directed. He was always ready to join us, bring his expertise and support the projects we were working on. I think he was just overall a well-rounded contributor to the community. He liked to give. He enjoyed being part of the great music that had been happening in this area for many years and continues to be and he was certainly worth mentioning on so many levels. He has truly made our community even better than we could have imagined.

Meanwhile, Peters notes that he was a quiet man. “He would get to sneak and sneak sometimes and he would be gone in a flash. He was never one for a ton of accolades. He had a hard time getting up at a concert or doing those extra curtsies and yet he deserved it.

How do you say goodbye to such a great contributor to music in the Southeast? Peters and Klassen make their attempts.

“Thank you for being one of the most generous friends another musician could have. It’s been a pleasure.”

The celebration of life by Robert Neufeld took place on Tuesday, November 8 at the Emmanuel Free Evangelical Church in Steinbach. In lieu of flowers, donations can be made to the Eastman Youth Choir, which is an honorary choir program that Neufeld has always been heavily involved with over the years.